Much ado has been made about Indiana and their version of the Religious Freedom Restoration Act (RFRA) law signed this week by Governor Mike Pence, championed by the Republican wing of the Indiana State Legislature and (deep breath) the founder/executive director of Advance America and all-round conservative ultra-right-wing Christian fundamentalist nut job, Eric Miller.

Man that was a long sentence.  My mom is likely turning in her urn.  Sorry Mom.

At any rate, I was sitting on my back porch tonight reading even more about Indiana’s RFRA, the back-peddling that Indiana politicians are engaging in at the moment and the reactions of some of the biggest names in industry, activism and social justice.  One thing that Governor Pence pointed out during he now infamous interview conducted by George Stephanopoulos on ABC News this last Sunday, was that 19 other states and the Federal government had passed “similar” legislation.  This got me thinking.  Is South Carolina one of the 19, and if so, what does ours say?

Ladies, Gentlemen and my transgender brothers and sisters, I give you S.C. Code §1-32-10, et seq.  This is also known as The Religious Freedom Act of 1999.  It passed by the South Carolina Legislature and signed into law by then Governor Jim Hodges…  a Democrat….   and much to my shock, an Episcopalian.

For all the internet searching that I did on this bill and law, I was unable to uncover the history of the bill’s path through the South Carolina House and Senate listed.  I was also unable to find any news reports written about it prior to 31-March-2015.  Given the era, I suspect that it was introduced, debated and passed with a ubiquity that our legislators normally reserve for the establishment of state parks, memorialized buildings and the passage of non-binding resolutions. 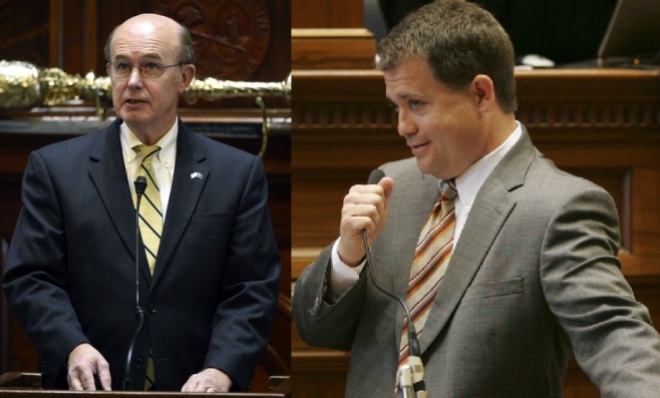 Colby Gallagher of WLTX-TV in Columbia, SC interviewed Senator Larry A. Martin (R-Pickens) today about the South Carolina RFA.  You can watch the video here.  Ms. Gallagher reported that Senator Martin said, “broad anti-discrimination policies are in place to protect people from being outright turned away for things like their sexual orientation.”  However, Senator Martin went on to say,

Left out of the video that WLTX posted was a quote from Senator Martin which Ms. Gallagher noted,

“The best thing to do would be to be busy that day.”

Senator Martin went on to say towards the end of the interview,

“You can’t overtly discriminate, but there are subtle ways of being able to exercise your philosophy, exercise your views. If a lesbian couple, gay couple came in and said look I want you to take my wedding pictures, if that offends the photographer, the photographer can say look I’m committed that day, I can’t possibly do it.”

“It’s just a preventative measure because we’ve seen in other states where folks are having to choose between their faith and their occupation and that shouldn’t be the case in America.”

Mr. Allen also interviewed Tommy Starling, Member of the Board of Directors for South Carolina Equality today as well.  Mr. Starling was quoted as saying,

“I just can’t imagine what I would say to my eight year old daughter. ‘The mean old man told us we had to leave because he doesn’t like our family?’ I mean, how do you explain that to a child?”

Senator Bright went on to say,

“When it comes to public accommodation and serving the public, religion should really stay out of the public spotlight.”

South Carolina’s religious freedom act is similar to Indiana’s in that both allow businesses to assert a right to free exercise of religion.  But it is significantly different too. Unlike South Carolina—Indiana goes further to make a business’s “free exercise” right a possible defense against a civil rights lawsuit brought by an individual.

Here are my takeaways from the interviews of today.

The rest, I leave to you to form your own opinions.  Here are some important links that we should all be reviewing.

This chapter may be cited as the “South Carolina Religious Freedom Act”.

(1) “Demonstrates” means meets the burdens of going forward with the evidence and of persuasion.

(3) “Person” includes, but is not limited to, an individual, corporation, firm, partnership, association, or organization.

The purposes of this chapter are to:

(1) restore the compelling interest test as set forth in Wisconsin v. Yoder, 406 U.S. 205 (1972), and Sherbert v. Verner, 374 U.S. 398 (1963), and to guarantee that a test of compelling state interest will be imposed on all state and local laws and ordinances in all cases in which the free exercise of religion is substantially burdened; and

(2) provide a claim or defense to persons whose exercise of religion is substantially burdened by the State.

SECTION 1-32-40. Restriction on state’s ability to burden exercise of religion.

The State may not substantially burden a person’s exercise of religion, even if the burden results from a rule of general applicability, unless the State demonstrates that application of the burden to the person is:

(1) in furtherance of a compelling state interest; and

(2) the least restrictive means of furthering that compelling state interest.

This chapter does not affect the application of and must be applied in conjunction with Chapter 27 of Title 24, concerning inmate litigation.

SECTION 1-32-50. Burden on exercise of religion a claim or defense; attorney’s fees.

If a person’s exercise of religion has been burdened in violation of this chapter, the person may assert the violation as a claim or defense in a judicial proceeding. If the person prevails in such a proceeding, the court shall award attorney’s fees and costs.

(B) Nothing in this chapter may be construed to authorize the State to burden any religious belief.

(C) Nothing in this chapter may be construed to affect, interpret, or in any way address:

(1) that portion of the First Amendment of the United States Constitution prohibiting laws respecting the establishment of religion;

(2) that portion of Article I, Section 2 of the State Constitution prohibiting laws respecting the establishment of religion.

(D) Granting state funding, benefits, or exemptions, to the extent permissible under the constitutional provisions enumerated in subsection (C)(1) and (2), does not constitute a violation of this chapter.