Weekend Edition on NPR seems to be the place to go to get at stuff that sparks real meaningful debate. This weekend’s show was no exception. This week, one of the spots touched on the debate over thoughts and prayers, which I’ve been especially tuned in to. It’s a good subject to touch on, but as much as I like Scott Simon, I don’t think he chose particularly well for this segment.

David French is an American attorney, journalist, and a senior fellow at the National

Review Institute. He is a veteran of the Iraq War and a major in the United States Army Reserve. He is a past president of the Foundation for Individual Rights in Education. A staff writer for National Review, he has also written several nonfiction books. He is not is a theologian by any means and is not qualified to offer commentary on sociological issues of the time. That said, I take umbrage with the vast majority of what he has to say.

SIMON: You wrote this week that for people of faith, including those who were in that church, prayer is, in fact, a powerful response. How so?

I am a person of deep faith in the Christian tradition, specifically in the Episcopal denomination. I’ll state also that consider my journey of faith to be very unique to me. My faith and spirituality works well for me and me only. It may or may not work well for someone else.

Now with that out of the way, I’d submit also that the faith of every single Christian on the planet resembles continual growth and maturation. The faith that Christ calls us to is 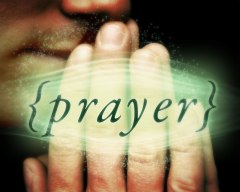 never absolute. It’s never complete. It evolves. It should be ever changing in order to meet the needs of the people around you and ones ever changing life circumstances. In conjunction with this growth, ones prayer life should evolve. If you’re someone who declares prayer publicly, such as on Twitter, you should be prepared for someone to look at your prayers and critique your motives. If you’re living an authentic Christian life, you might want to pay attention without offering an immediate rebuke when this kind of criticism happens. That criticism might be God speaking to you through one of those folks.

Prayer is for me and not necessarily for someone else.

SIMON: Well, there’s – I don’t have to tell you, there seems to be a particular enmity directed at politicians who offer thoughts and prayers rather than any kind of action. People see it as a dodge. How do you respond?

FRENCH: Well, I think the problem is what they don’t – it’s not that these politicians are offering thoughts and prayers and no action. It’s that the politicians are – tend to be offering thoughts and prayers and not the action the activist wants. And so – for example, I don’t think there’s a politician in Washington of good faith who would say – for example, in response to this Texas church shooting – that the Air Force shouldn’t be reporting all of its misdemeanor domestic violence convictions to the FBI database. So – or that there shouldn’t be other measures taken in response to this, you know – what seems to be a recent epidemic of mass killings.

As I’m writing this, I’m sitting in a coffee shop in Savannah, GA which is owned and operated by a friend of mine who is an ordained minister in the United Methodist Church. He happens to be here working tonight. We’re sitting here and talking about this, touching on Wil Wheaton and his tweet and discussing the deeper theology of prayer. One of the things that we agreed on is that “my prayers are for me.” They are offered to give me some comfort that I asked God, on behalf of another person, to provide comfort to victims. They are offered in the hopes that I might be able to think of something to contribute to preventing this terrible thing from happening again or helping to ease the pain.

These prayers, since they’re mostly for ourselves to help ourselves do something, they have to be followed by actually doing something. I think that Mr. Simon is correct and Mr. French is very much incorrect. When a politician has offered thoughts and prayers, they have traditionally done absolutely nothing to follow-up on them. It’s their job to

protect life & liberty of every single citizen they represent. They have failed to do this in every single instance of a mass shooting since 2001. Every. Single. One. This makes their thoughts and prayers not much more than them providing comfort for themselves and the dotards listening to Fox Noise. In the eyes of someone who chooses not to lead a life of spiritual existence, this is rightly seen as a complete and utter political jerk-off. I would contend also that people who blankly offer their thoughts and prayers on social media completely contribute to this to the point of thoughts and prayers becoming a bukakke of empty words said for no other purpose than to dodge the moment where true leadership is required.

SIMON: Jeannie Gaffigan, the comedy writer and producer who has been publicly battling a brain tumor and happens to be a person of faith, this week tweeted, I’m living proof that prayer works. She’s feeling better now. But it also takes enormous effort along with prayer, sometimes a lifetime of struggle and dedication. Do you agree with that?

FRENCH: Oh, absolutely. I believe – you know, there’s a scriptural principle that faith without works is dead. In other words, you should pray and you should act. But I think the main criticism that many of these Twitter activists are offering is that they’re saying, don’t say thoughts and prayers. Say what I want you to say. And in a political environment where there’s sharp polarization and very different ideas about how to respond to a crisis, that’s just never going to happen. And besides, what use is an activist tweet anyway?

I do deeply wish Mr. French had the ability to not play both sides of an issue to save face. I guess that comes with working for a GOP think-tank. He’s almost got it. There’s a runner headed towards first base. He catches the ball, looks knowingly at the first baseman, then hurls the ball to left field.

He catches the ball here: “…you know, there’s a scriptural principle that faith without works is dead.” He’s absolutely right. Faith requires you to work in order to further that faith. We Christians living an authentic Christ-like life live, work and love in faith that we might further the kingdom of God.

He then looks to the first baseman knowingly – “In other words, you should pray and you should act.” Scripture teaches us that God rarely acts alone. God requires us to be the hands, feet and voice of the prayers and supplications that we offer. Without them, we’re just talking.

Then he hurls the ball into left field – “But I think the main criticism that many of these Twitter activists are offering is that they’re saying, don’t say thoughts and prayers. Say what I want you to say.” You can’t say this Mr. French. That’s because they’ve donenothing – ABSOLUTELY NOTHING – following each one of these despicable and completely preventable acts. It’s not that we, the “Twitter activists” expect to have done what we want done, it’s that that we expect our leaders to do ANYTHING in an attempt to protect life and liberty. 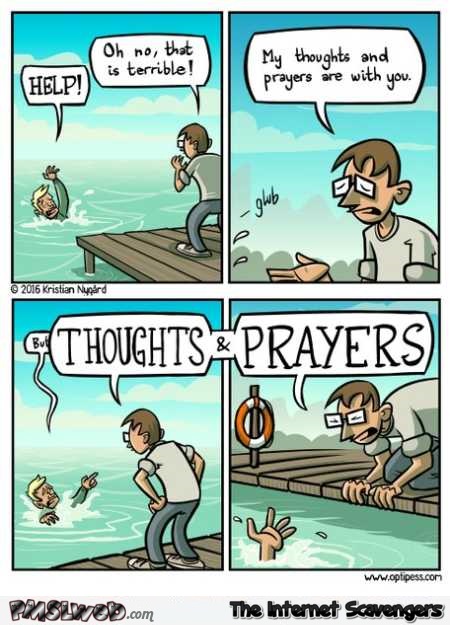 Frankly, I don’t need to know that you’re thinking and praying about victims of violence, crime, oppression and any number of instances of terribleness going on in the world. All you need to know is that I am a Christian and that’s what I do. I’m not going to declare on social media my intent to think and pray for people because I don’t need your validation of my personal faith. What I do need is for people who are going to engage in thoughts and prayers to do something after the fact. THAT you can tell me about. Make me to know that we live in a country where we do things to protect the lives of the least among us.

Mr. French opened himself up to being familiar with scripture and what scripture calls of us to do as faithful followers of the Christian spiritual tradition. I think Mr. French, along with all others who offer prayers with no action, should consider the words of Jesus according to Matthew, Chapter 6, verses 5 & 6.

“And whenever you pray, do not be like the hypocrites; for they love to stand and pray in the synagogues and at the street corners, so that they may be seen by others. Truly I tell you, they have received their reward. But whenever you pray, go into your room and shut the door and pray to your Father who is in secret; and your Father who sees in secret will reward you.”

In other words, keep your thoughts and prayers between you and God as you understand him or her. Tell me what you intend to do about what you’re praying for and then go out and do it with the courage of your faith.