Posted in Politics, Social Justice by IrvinWithAnEye On March 30, 2015. No comments

Many of my posts have had a particularly political bent to them lately, and I’m sorry about that.  I promised myself that when I started this site, I wasn’t going to do this.  It’s somewhat unavoidable what with the tremendous amounts of stupid that are popping up in recent weeks.  I promise that it’s on my mind that I vary the subject matter a little and I hope you’ll stay tuned for more stuff as Chuck Barris used to say.

So this picture is making its way around the internet:

Usually, when I see stuff like this on the internet, especially from the Facebook group, “StopTheWorldTheTeabaggersWantOff,” I try to fact check this stuff first.  PoliticusUSA seems to be the one site which used this quote so far and the quote is not cited.  I’ve asked the author of the piece to cite his or her source.  As of the writing of this piece, @rmuse.  The author doesn’t identify him or herself on any website, thus my skepticism as to the validity of the quote.  Given the interview that Governor Pence gave to George Stephanopoulos, I’m a little bit doubtful that these words were uttered by Pence, but even if they weren’t I’m sure that this is an accurate reflection of the thought process of everyone who helped craft this bill.  The reason feel this way is because of who one of the primary lobbyists was behind the bill, Eric Miller.

Eric Miller is an attorney who founded the lobbying group “Advance America” in 1980.  (If you would like to contact Mr. Miller, you may do so by contacting him at his law firm, Miller, Waters, Martin & Hall.)  Advance America is a lobbying group that Governor Mike Pence apparently has close ties to.  To see how deeply these ties go, watch this video from Advance America.  Advance America bills itself as “a nonpartisan, tax-exempt, educational organization and as such does not endorse any candidate or political party.”  I seriously wonder how “non-partisan” Advance America is when they publish pieces like this. 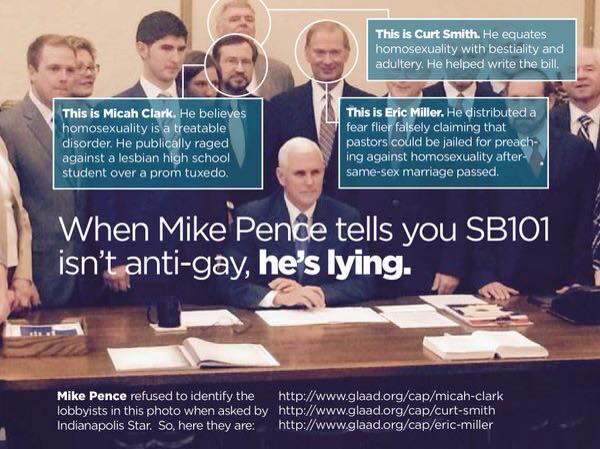 When I watched the ABC News interview with Governor Pence, I was dumbstruck!  The man couldn’t even be bothered to answer the simple yes or no question, “If a florist in Indiana refuses to serve a gay couple at their wedding, is that legal now in Indiana?”  He went on and on and on for 11 minutes and 40 seconds about how this bill is not about discrimination when it absolutely is!  It’s in Advance America’s own words!

I wonder what version of The Bible these folks read.  I’ve read it cover to cover a couple times myself.  Everything that I read about Jesus says that he went out of his way to find the sinners and love them.  He met them where they were and he loved them all.  I find it hard to believe that God-fearing men such as Governor Pence and Eric Miller could think for a second that they know Jesus of Nazareth as I and millions of other Christians around the world do.

Here’s the thing though.  While Advance America, Eric Miller and Governor Pence all give me a belly ache, I wish that we would continue to have a factual and thoughtful discourse.  Entities such as @rmuse and http://www.politicususa.com/ and “Stop the World, the Teabaggers Want Off” aren’t doing anything to help.  Why not let these folks destroy themselves with their own words?  It’s plain sad that we as an allegedly enlightened people lower ourselves to textbook muckraking.

I sincerely hope that Indiana is able to eat the lost tax revenue from Salesforce, Angie’s List, the NCAA, GenCon and the State of Connecticut.  In case you were wondering:  The following people had a hand in SB101’s creation.  You should reach out to them each and tell them how you feel. 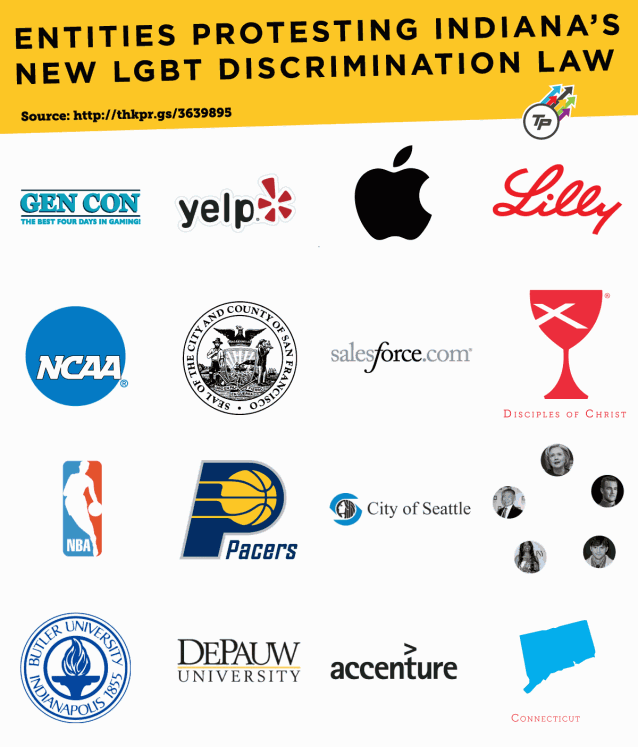 By the way @rmuse and PoliticusUSA.com: When I quote someone, I cite the source with a link.